Doing business online – especially through free search engine traffic – is becoming harder than ever. Search engine optimisation opportunities seem elusive at best, even when you manage to attain top rankings for your most popular keyword phrases on Google. Those search engine rankings do not always hold, and there’s a chance that they might disappear at any time.

What do we mean? Well, so many people have a complete focus on the Google search engine. But they forget all about Yahoo and Bing, which run off of the Bing search engine framework and deliver the same exact results. 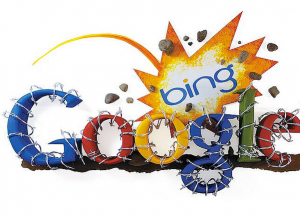 What happens is you will typically rank highly for a specific keyword phrase in both search engines if you perform the correct search engine optimization. And now is the time to start working on Bing SEO because the search engine is making serious moves and it’s about to get a whole lot more traffic than it has been seeing in quite a few years.

Why Is Bing Search Engine Traffic Going to Improve?

As of this moment, Google basically dominates search. They control between 75 to 80% of the search engine traffic. But we’ve recently learned that this number is bound to change, and when it comes to Bing and Yahoo, it’s going to change for the better.

Well, as of December 1, 2014, when Mozilla Firefox released their 34th version update*, they did so with one specific change. The update now has Yahoo as the default search engine as opposed to Google. This change alone is going to bring a lot more searchers to the Yahoo search engine, because people are ultimately lazy and they’re not going to type in Google.com in order to get search results. They will use the Yahoo search engine because it’s there, ready and waiting to be used.

Mozilla Corp. announced in early November that it has struck a partnership with Yahoo! Inc. to make it the official search engine for Firefox’s North American users. Overseas, Yandex is now the default search engine used for Firefox 34 in Russia, Belarus and Kazakhstan. Under this partnership, Yahoo and Yandex will support Firefox’s Do Not Track feature to keep the user’s identity safe.”

As a business owner or somebody looking to capitalise on all of the fantastic traffic available on the Internet, working on Bing SEO and Yahoo search engine optimization is definitely a wise choice at this moment. Having high rankings in the search engines will bring a whole other level of traffic to your websites.

Another good thing to note is that the traffic that typically comes from Yahoo and Bing is a lot more buyer friendly than Google search engine traffic. It’s considered a more sophisticated group of searchers, and these people have a lot more disposable income on their hands as well. And usually when people with disposable income are looking for your products and services, this is ultimately going to turn into more money for you and your company.

Are you starting to recognize the power of focusing on Yahoo and Bing SEO? It could make a huge difference to your business, and finally end up putting you in the driver’s seat to creating more sales and bringing in new customers into the fold.

When Should I Begin Focusing on Bing SEO?

Well, it should be fairly obvious to you at this point, but now is the time to begin shifting your focus. We aren’t saying to ignore Google at all, but we are telling you to consider Bing and Yahoo because they’re going to start seeing more traffic and become a more dominant player in this market once again. See this Google + post I made late last year; https://plus.google.com/+AndrewandTrishRiedel/posts/2eXNZnPanSg

Remember, as we mentioned above, the update to the 34th version of the Mozilla Firefox web browser already happened on December 1st of 2014. So, the opportunity is already there, and it always pays to be ahead of the pack at the forefront of change.

So many business owners are just strictly focusing on Google and nothing more. They forget all about Yahoo and Bing because their traffic numbers are a lot lower than the big G. But you’re a savvy business owner and you understand the value of getting in front of this traffic before it finally spirals and blows up to astronomical levels.

If you need help with Bing and Yahoo SEO, we would love to lend a hand. Call us for a consultation and we’ll put together a strategy to have you dominating these search engines in no time.

Call SEO Gold Coast For A No Obligation Quote